Jachtbitter is the market leader in Dutch herbal liqueurs segment. In Europe, the warming effect of a herbal bitter such as Jachtbitter is especially popular during the cold time of the year. Jachtbitter is also somewhat sweeter than traditional bitters, and so forms the perfect complement to general taste preferences. In the warm climate of Africa, a cold Jachtbitter (the original or in a mix with fruit, or coffee, or energy drink) –just-gives you that bit of extra ….Jachtbitter, ” THE HUNTERS SECRET” 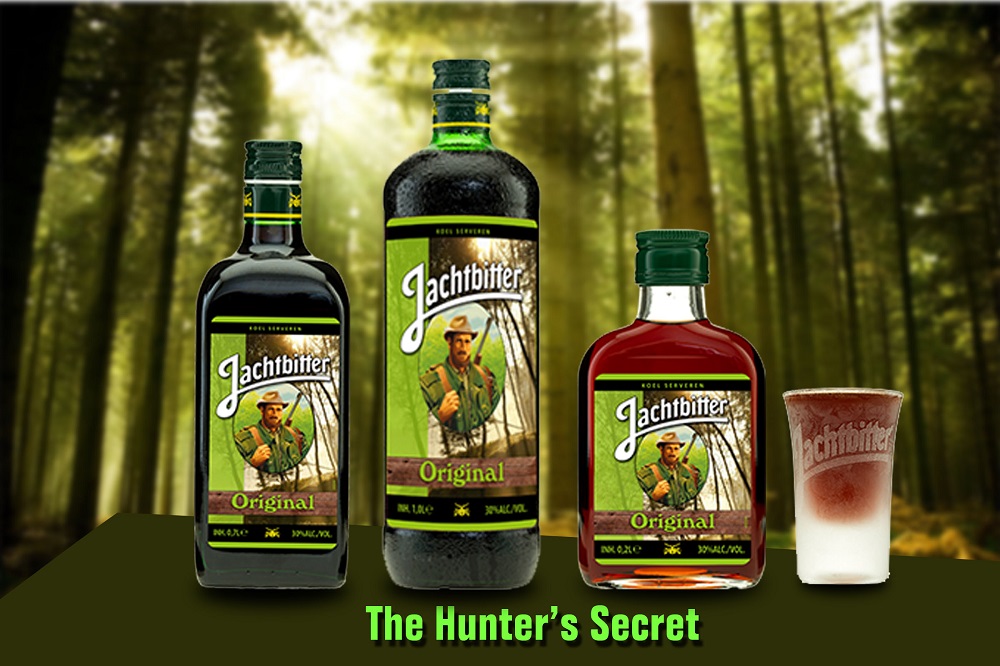 Jachtbitter has a flavour which is both powerful and mild with a delicate blend of spices. Jachtbitter is flavoured with cinnamon and clove along with star anise, peppermint, gentian root, liquorice root and thyme. This herbal bitters have been made for centuries and have always been popular as a pick-me-up or digestive.

Jachtbitter COFFEE SHOT
Been hunting for a while and beginning to get tired… but you have to go on? Raise your energy levels with caffeine! Jachtbitter combined with coffee liqueur is an unexpected choice, just try it!

Jachtbitter ENERGY SHOT
Just finished an activity where you used a lot of energy? You have to refill your energy! Then take the Energy Shot, being Jachtbitter in combination with energy drink!

Mix it this way:
• take 25 ml Jachtbitter
• Fill the rest with energy drink.

Jachtbitter SWEETER SHOOTER
Grab a frozen shot glass, put in the Jachtbitter and top it up with energy drink! Cheers!
A Sweeter Shooter is for the hunter who prefers sweet things. Try Jachtbitter combined with coffee liqueur and a cream liqueur of your choice!

In short, energy is very important whilst hunting!!! (business hunting, women or men hunting, etc)  A Sweeter Shooter of Jachtbitter gives you the sharpness, focus and energy you need to catch a sweeter prey!

The hunter in you is the energy, the focus, the concentration, the sharpness. To Catch the right and the sweeter prey!, take Jachtbitter, The Hunters Secret.

Roelof Hendriks Gorter was born in the year 1768. Roelof lived with his wife Trijntje and five children in Dokkum, a small village located in the Dutch province of Friesland. Roelof was a real family man. In the 18th century, it was not always easy to find food. To put food on the table, Roelof went hunting every day. When his sons were old enough they joined their dad. Sometimes they came home empty handed and sometimes with ducks, hares and rabbits. Upon returning home from the hunt Roelof preserved the game by soaking it in his homemade gin. At first the gin was just for himself and his household, but before long family, friends and neighbours all came along to fill their gin jars.

Roelof concentrated on distilling liquor. The gin was soon followed by a herbal liquor. By using herbs from the neighbourhood and adding sugars, he devised a new recipe: his own herbal liquor: Jachtbitter. Roelof and his sons took ‘Jachtbitter’ with them while hunting, to keep themselves warm and ward off the chill. But after the hunt they also took a drink of Jachtbitter toasting to love and happiness. Family, friends and neighbours were curious and were surprised by the pure, slightly sweet herbal liquor. It was so very popular that in 1816 Roelof decided to sell his herb liquor from his new hometown Sneek. As from then on Jachtbitter was not only for himself, but for everyone who loves it.

You must be of legal drinking age at your current location to enter this site. We use cookies.

I am of legal drinking age... MORE INFO